It's August 1997. Four characters converge on three houses in Morricone Crescent at the heart of London's Notting Hill where four carefully staged deaths tie them together.

is the journalist who lost his Fleet Street job after asking the wrong questions.

is determined to pay her moral debt to the manager who gave her a break as a singer.

is delving into a unsolved hit-and-run and doesn't mean for the witnesses to start killing each other.

is the once child star of a Brazilian soap who left the stage to turn her hand to fashion in London.

The How is obvious. The Why is a mystery.


If you are looking for the "Death of a Bad Neighbour - Revenge is Criminal" anthology, go here:
www.doabn.com 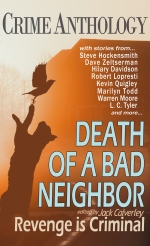